March 29 marked a year since the first low-dose CT (LDCT) scan was completed in Doncaster. The primary aim of the programme is to reduce deaths from lung cancer.

Those invited to take part in the lung health checks are people identified as being at a higher risk of lung cancer - typically those aged between 55 and 75, who either currently smoke or have smoked in the past and are registered with a Doncaster GP.

The NHS Long Term Plan is committed to extending the Targeted Lung Health Checks (TLHC) programme across England to help deliver the ambition of diagnosing three out of four people with cancer at an early stage by 2028.

The Doncaster programme has been operational since mid-March 2021 and in the first year 11,857 lung health check calls and more than 5,000 initial scans have taken place; 50 lung cancers have been found, 73% of which were early-stage lung cancers.  Seven other cancers have also been confirmed and 41 patients (75%) have been given life-saving cancer treatment so far. 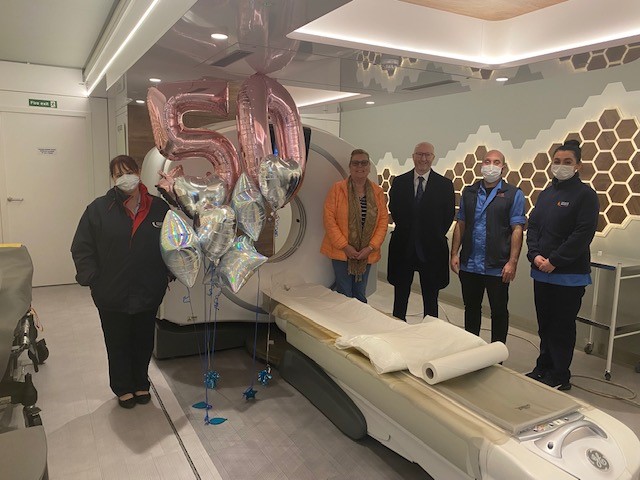 Dr Jason Page, Clinical Director for the Doncaster TLHC programme said “I am delighted that this programme continues to save lives across the area. Hundreds of people each month are attending their screening CT scans.

“The benefits of screening are clear to see. The programme is reducing the devastating impact that lung cancer has on hundreds of families across the borough.

“Lung cancer remains one of the most common cancers accounting for thousands of deaths a year in the UK. Because lung cancer doesn’t always cause symptoms at an early stage, it is frequently diagnosed late when treatment options are more limited and survival rates are lower, but if caught early, it’s much more treatable and the survival rate is much higher."

Less than a year ago Sandra from Rossington received a letter inviting her to take part in the Doncaster Lung Health Check.  She hadn’t experienced any symptoms of having a lung problem. However, due to her age and health background she was eligible for a check which identified a tumour on her lung.  Sandra underwent treatment and has made a complete recovery and has been given the ‘all clear’.  You can watch Sandra’s story here.

Sandra said: “You don’t expect to get cancer. You think you’re not going to get it, but you can. The doctors and nurses are fantastic, and they’re all working hard to make sure more people survive. I’m thankful that I had the opportunity to take part in the Doncaster Lung Health Check.

"The sooner you get treatment the better. I say to people just go for it, you should always get checked. It could save your life."

A lung health check can give you reassurance that your lungs are healthy and can help identify problems early.